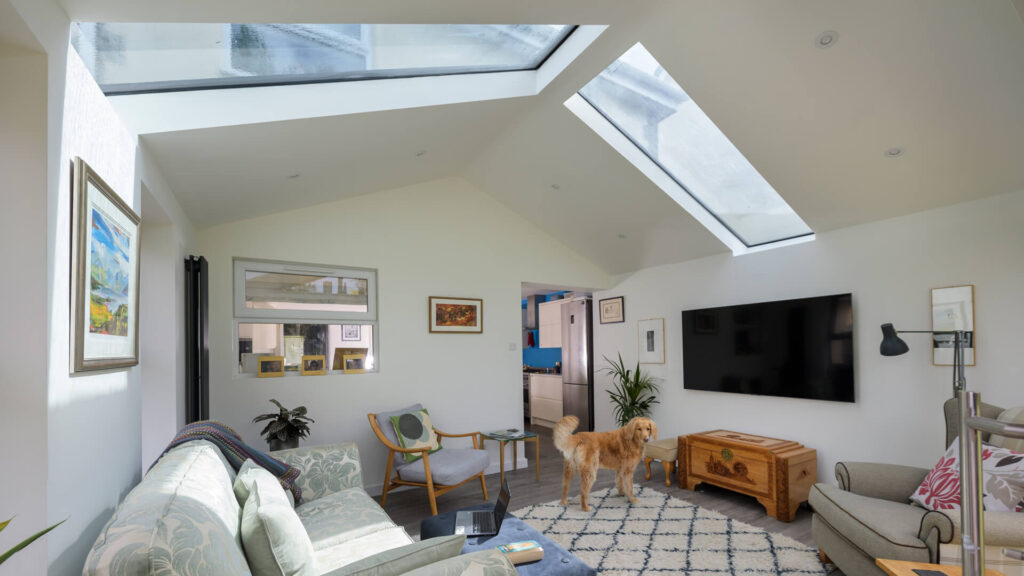 Everything was turned on its head by the pandemic, including how we had to work, with millions forced with no option but to carry out their duties from home.

There hasn’t been a full-time return to the traditional office for lots of people, as some companies have reverted to permanent or part-time home working.

It’s no surprise then that we have seen an increased volume of enquiries for our home office extensions.

If you get to WFH all the time or a few days a week, it would be in your interests to have an office built into your house so that you can make easy work of it.

Having a home office will be advantageous for other reasons too:

In a shared office it can be difficult at times to focus on your work, with people in your ear, music playing, phones ringing etc., making you unproductive.

You won’t have any of that in your own office, and it will be totally up to you what music you have playing if you like some tunes blaring out while you do your stuff.

Politely ask those in your house to refrain from disturbing you, unless, of course, it’s to provide you with the odd cup of tea.

Car travel is as expensive as it’s ever been right now as petrol prices hit record highs, which isn’t helpful if you have a big commute to work.

The only bit of travelling you will have to do though is walking from your breakfast table to your office, saving you loads of money and burning a few calories too.

You also won’t get stuck in gridlock, so there will be no more late mornings and late nights getting back from work.

When you first start a job or if there’s an office reshuffle, you very often get told where to sit and have no say in the matter.

But with a home office, it can be designed and organised exactly how you want it. If you’d like it decorated and furnished a certain way, who’s stopping you from doing it? We won’t and your boss can’t do anything about it!

To discuss getting a home office arranged, just make an appointment with the Mitchell Glass team here.

Everyone is welcome to come in and browse around our showroom, where our friendly sales team will be pleased to help with any questions you may have over a cup of coffee.

Our friendly team will be pleased to help with any questions you may have.

Back To Our Blog

We use cookies to give you the best experience on our website and to make sure the ads you see on other sites are relevant. By continuing, you agree to our use of cookies. Find out more here.
ACCEPT
Manage consent

This website uses cookies to improve your experience while you navigate through the website. Out of these, the cookies that are categorized as necessary are stored on your browser as they are essential for the working of basic functionalities of the website. We also use third-party cookies that help us analyze and understand how you use this website. These cookies will be stored in your browser only with your consent. You also have the option to opt-out of these cookies. But opting out of some of these cookies may affect your browsing experience.
Necessary Always Enabled
Necessary cookies are absolutely essential for the website to function properly. These cookies ensure basic functionalities and security features of the website, anonymously.
Functional
Functional cookies help to perform certain functionalities like sharing the content of the website on social media platforms, collect feedbacks, and other third-party features.
Performance
Performance cookies are used to understand and analyze the key performance indexes of the website which helps in delivering a better user experience for the visitors.
Analytics
Analytical cookies are used to understand how visitors interact with the website. These cookies help provide information on metrics the number of visitors, bounce rate, traffic source, etc.
Advertisement
Advertisement cookies are used to provide visitors with relevant ads and marketing campaigns. These cookies track visitors across websites and collect information to provide customized ads.
Others
Other uncategorized cookies are those that are being analyzed and have not been classified into a category as yet.
SAVE & ACCEPT
Powered by

GET A QUOTE NOW! DOWNLOAD A BROCHURE FINANCE CALCULATOR